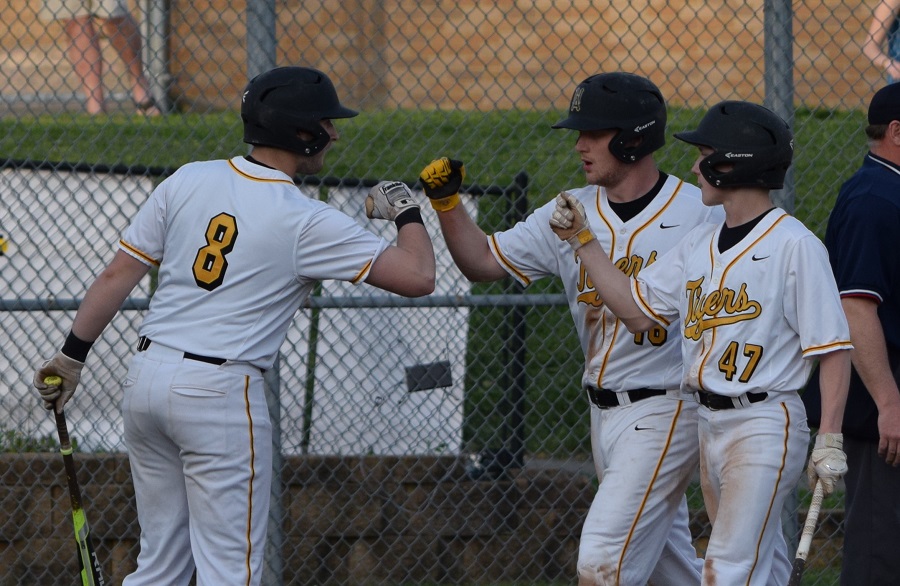 North Allegheny snapped Bethel Park’s 14-game winning streak and upset the second-seeded Black Hawks, 3-1, in the WPIAL Class 6A quarterfinals on Tuesday afternoon at Boyce Mayview Park. The 10th-seeded Tigers received a complete-game effort from starting pitcher Luke Trueman who allowed only four hits and one unearned run to earn his second straight postseason victory. Trueman struck out six and earned the Wright Automotive Player of the Game Award from the North Allegheny Sports Network.

It was Trueman’s bat that got the Tigers started offensively in the top of the first inning with an infield single. After stealing second base, Trueman checked out in favor of courtesy runner Joey Colella who advanced to third on a passed ball and scored on a wild pitch to give NA a 1-0 lead. In similar fashion, Bethel Park evened the score at 1-1 in the bottom of the second inning when Eric Chalus scored on a wild pitch.

From that point on, a pitcher’s duel between Trueman and Bethel Park ace Justin Meis ensued with neither team hitting the ball hard, if at all. Meis struck out an astonishing 13 batters through four innings, one strikeout on a wild pitch, and totaled 16 punch outs on the afternoon.

One of the few blemishes for Meis was a leadoff walk in the fifth inning that North Allegheny cashed in to take the lead. Brett Heckert drew the leadoff free pass and was sacrificed to second base by Anthony Hattrup. Pinch-runner Will Mracna entered for Heckert and immediately scored on an RBI double by C.J. Weller to deep left field to give North Allegheny a 2-1 advantage.

The Tigers added an insurance run in the top of the seventh inning on an RBI groundball by Trueman that scored Anthony Hattrup from third base for a 3-1 lead. Bethel Park built a major threat in the bottom of the seventh and loaded the bases with two outs before Sean McGowen popped out to short to end the ballgame.

North Allegheny leaps to 12-10 on the season and advances to the WPIAL semifinals to face the Hempfield Spartans on Wednesday at 7:00 p.m. at Boyce Mayview Park. The game will be broadcast live by the North Allegheny Sports Network. Bethel Park ends the season with a 17-4 record.