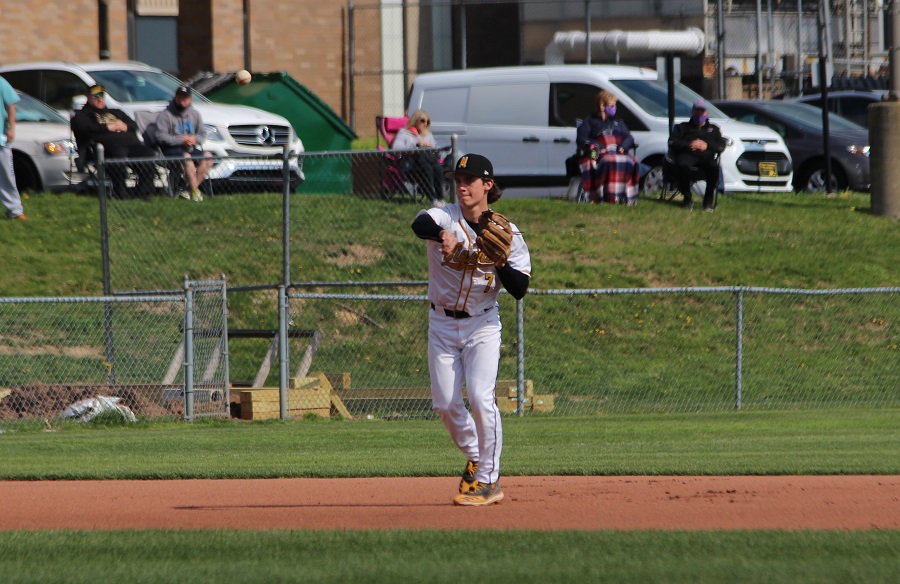 North Allegheny seized sole possession of first place in the Section 1-6A standings with an 8-1 win over Butler on Monday night. Senior pitcher Brady Palmer tossed a complete game in his second straight start and a pair of two-run homers helped NA stop Butler’s five-game winning streak. The Tigers’ win over Butler, coupled with Seneca Valley’s loss to Central Catholic earlier in the day, vaulted NA into first place.

On the mound, Palmer was masterful and efficient, needing just 92 pitches to go the distance. Palmer yielded only three hits and one unearned run, while striking out six batters and walking two. Improving to 4-0 on the season, Palmer was named the Wright Automotive Player of the Game.

With Palmer dealing, the Tigers lineup provided more than enough run support to top the Tornado. In the first inning, junior Cole Young clubbed a two-run homerun over the rightfield fence for an early 2-0 lead. The home run was Young’s team-leading fifth of the season and second in as many games.

In the second inning, NA took Butler starter Colin Patterson deep again as sophomore Spencer Barnett crushed a hanging breaking ball over the right centerfield wall for another two-run homer and a 4-0 lead. It was Barnett’s third long ball of the campaign.

With runners at the corners and two outs in the fourth inning, senior Ethan Gavlik beat out an infield single to score Erik Sundgren from third base for a 5-0 lead. After Butler scored an unearned run in the top of the fifth, cutting the NA lead to 5-1, the Tigers struck for three runs in the home half of the fifth. Barnett drove in his third run of the night, and 21st of the season, with an RBI single for a 6-1 lead. Later in the inning the advantage swelled to 7-1 thanks to another infield RBI single by Gavlik. A bases loaded walk by Young drove in his 14th run of the season for an 8-1 lead and NA’s final run of the night.

Young went 2-for-2 and walked twice to reach base four times on the evening, to go along with three RBI. Gavlik was 3-for-4 with a double, two RBI and one run scored.

The win improves North Allegheny’s record to 11-2 overall and 6-1 in Section 1-6A. Butler slides to 9-4 overall and 5-2 in the section. The Tigers will visit the Golden Tornado in game two of the home and home series on Tuesday night at 7:00 p.m.