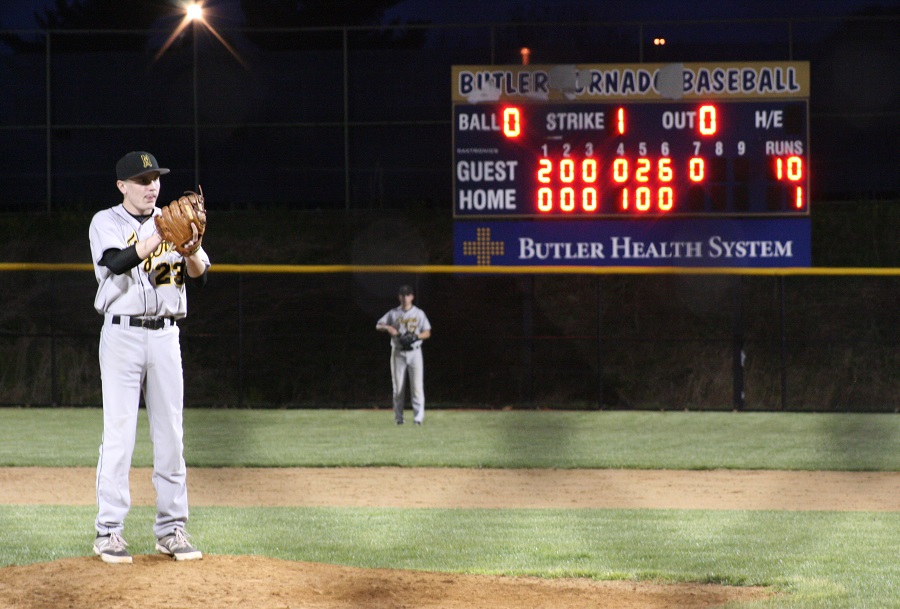 Behind a complete game performance from pitcher Nick Gross, and a six-run sixth inning, North Allegheny claimed an important Section 1-AAAA victory at Butler, 10-1, on Tuesday night. Gross (2-1) surrendered only four hits and one unearned run to earn the victory. Butler proved to be hospitable hosts and committed eight errors to help the NA cause.

The error-filled night for the Golden Tornado began immediately as Keegan Phillips scored on a first inning error and Ryan Hamm followed with a sac fly RBI for a 2-0 Tigers lead. Butler cut the NA lead to 2-1 in the bottom of the fourth when Luke Sankey singled home Ian Steighner but it was the closest the Golden Tornado would come.

North Allegheny expanded the lead to 4-1 in the top of the fifth on a two-run single by Daniel McCauley and blew the game wide open with the big sixth inning. Butler committed three errors in the inning and the Tigers converted them into six runs and a 10-1 advantage.

Phillips helped set the table for the Tigers offense with three hits and three runs scored, while Hamm, McCauley and Blake Young all drove in two runs apiece. With Gross’ gem on the mound there was little Butler could do to prevent NA from cruising in the final inning to the victory. Golden Tornado starter Wyatt Daugherty suffered the loss, working 5.1 innings with 10 runs allowed.  Only two of the runs were earned.

With their third win in a row, the Tigers improve to 9-7 overall and 5-3 in Section 1-AAAA.  Butler slips to 7-8 overall and 4-4 in section play. North Allegheny hosts first-place Seneca Valley Wednesday night at 7:00.  The game will be broadcast live via the internet on the North Allegheny Sports Network.