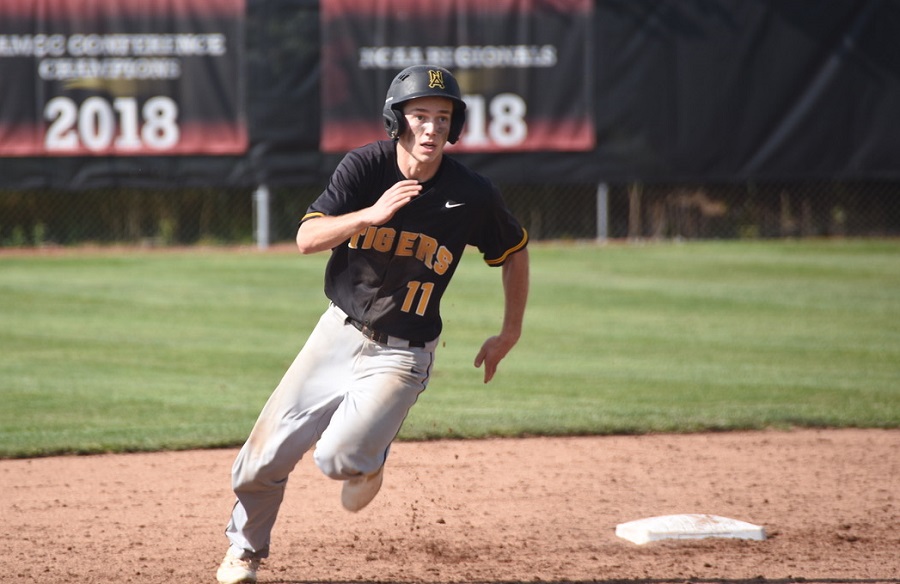 North Allegheny took advantage of four Pine-Richland errors to take the grudge match from the Pine-Richland Rams, 4-1, to advance to the PIAA Semifinals. Ryan Partridge threw a complete game and Shane Murphy had two big two-out RBI hits to propel NA to victory.

Pine-Richland got the scoring started in the bottom of the first when Josh Scherer hit a sacrifice fly to left field scoring Troy LaNeve for a 1-0 lead. The Tigers wasted little time getting the run back in the top of the second inning when Ryan Dougherty led off with a double and scored on a Murphy two-out RBI double to even the score at 1-1.

Both pitchers settled in and had scoreless innings until the top of the fifth when C.J. Weller reached on an error, went first to third on a Cole Young single and then scored when Jared Orwell hit into a double play to make the score 2-1, North Allegheny. The Tigers tacked another run on in the sixth when Cam Medic reached on an error with two outs and scored on a Murphy RBI double for a 3-1 advantage. The Tigers got an insurance run in the seventh for a 4-1 lead. Weller singled, Young got hit by a pitch, both advanced on a wild pitch and Weller scored on an error.

Partridge was the Wright Automotive Player of the Game picking up his second complete game victory against Pine-Richland this season by going seven innings, allowing four hits, one run, striking out six and walking one.

Tommy Beam was the tough-luck loser, going 5.2 innings and allowing six hits, three runs, one earned, striking out seven and walking one.