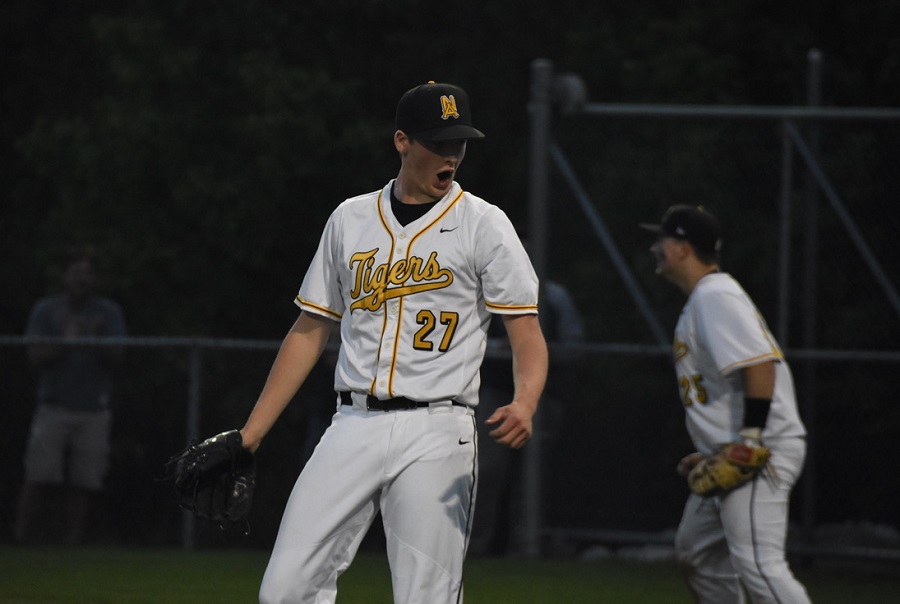 Senior pitcher Ryan Partridge silenced the vaunted Pine-Richland Rams and their prolific offense, propelling North Allegheny to a 2-0 shutout victory on Monday night in Section 1-6A action. The NA southpaw tossed a complete game, two-hit shutout and struck out 11 batters to earn Wright Automotive Player of the Game honors. The victory extends NA’s winning streak to six in a row, while also halting Pine-Richland’s winning streak at 10.

Facing a lineup littered with Division I talent, Partridge proved his status as a Penn State commit and was in the groove from the first inning on. Patridge needed very little in run support and received a big lift in the bottom of the first inning when Jared Orwell hit his first home run of the season over the leftfield fence for a 1-0 North Allegheny lead.

After two outs in the bottom of the second inning, Shane Murphy and Anthony Hattrup posted back-to-back singles, followed by a stolen base from Hattrup to put runners at second and third. Pine-Richland starter Tommy Beam balked, which scored Murphy from third to stretch the NA advantage to 2-0.

The two runs were more than enough as Partridge needed only to pitch out of one jam in the third inning and cruised to his fourth win of the season.

Beam also pitched well and was the hard-luck loser for Pine-Richland, allowing only five hits and striking out seven.

North Allegheny improves to 13-5 overall on the season and 7-2 in Section 1-6A. First-place Pine-Richland dips to 13-4 overall and 8-1 in section play. The Tigers will round out their section schedule on Tuesday at Allderdice at 3:30 p.m. An NA win, coupled with a Pine-Richland loss to Seneca Valley, would earn the Tigers a co-share of the section title.