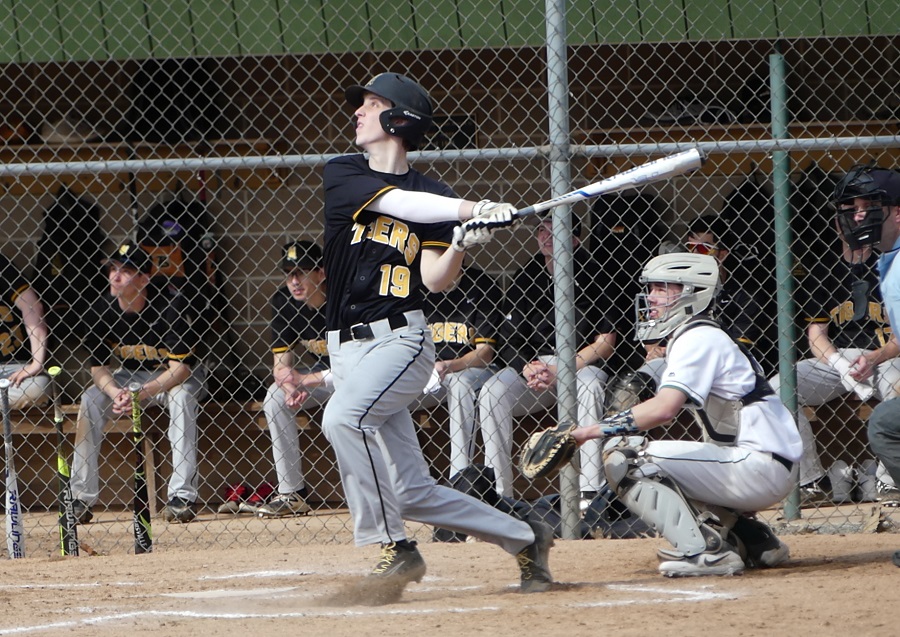 The North Allegheny baseball team dropped a non-section contest to Penn-Trafford on Wednesday afternoon by a 6-5 decision at Seton Hill University. The Tigers held a 5-3 lead after four innings but the Warriors rallied for three runs in the bottom of the fifth inning to claim the win.

Penn-Trafford’s Maclean Maund was 2 for 3 with three RBI’s and produced a two-run single that scored the game-tying and game-winning runs in the fifth. Maund was also the winning pitcher in relief with three scoreless frames and five strikeouts.

In a seesaw affair, it was North Allegheny who struck first in the top of the first inning. Ryan Dougherty opened the game with a lead-off triple and scored moments later on an RBI groundout by Jared Orwell for a 1-0 Tigers lead.

Penn-Trafford answered immediately with three runs in the bottom of the first for a 3-1 lead, highlighted by an RBI single from Bobby Lane and an RBI triple by Maund.

The Tigers leapfrogged ahead in the top of the fourth inning with a four-run frame. Senior Anthony Hattrup trimmed the deficit to 3-2 with an RBI single that scored Cam Medic. Aaron Posey followed with a two-run single and scored on a Penn-Trafford error to pull NA ahead, 5-3.

North Allegheny starting pitcher Kevin Schott worked four innings, allowing three runs with four strike outs and one walk. Schott left game in line for the victory but Penn-Trafford managed to rally against the NA bullpen for three runs in the bottom of the fifth to steal away a 6-5 win.

Following the loss, North Allegheny drops to 0-2 on the season, while Penn-Trafford improves to 2-0. The Tigers will take on fifth-ranked Canon-McMillan in a WPIAL Championship Game rematch at 4:00 p.m. on Thursday at Wild Things Park.