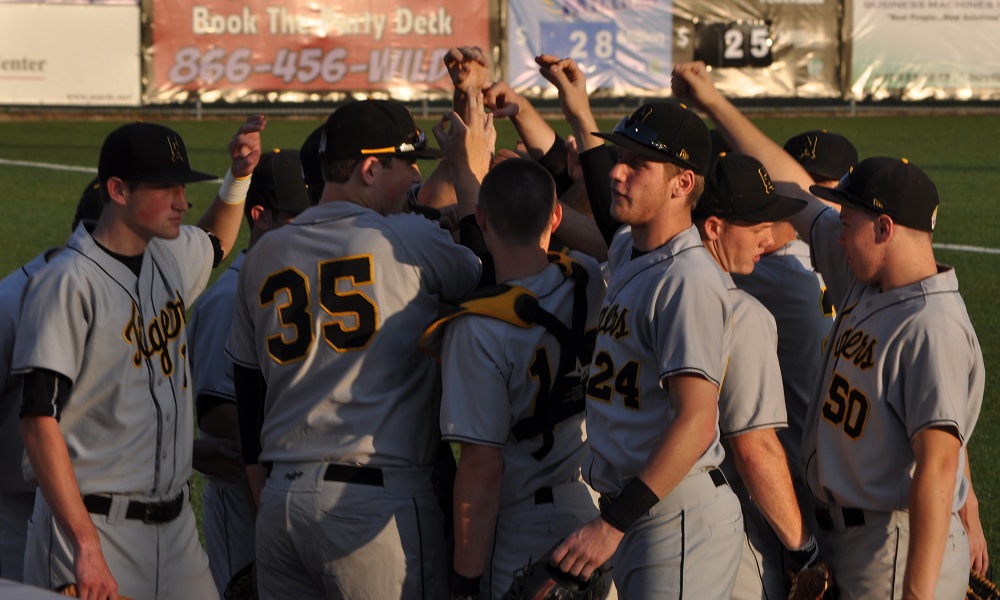 Senior Matt Waugaman drove in three runs and scored another to help lift North Allegheny to a 4-2 extra inning win over rival Seneca Valley in the PIAA quarterfinals on Friday at Pullman Park. Senior shortstop Brandon Bergstrom set the table for Waugaman on the day, scoring three runs and reaching base four times. James Meeker pitched 8.2 innings of relief to improve to 4-0 on the season and kept the Raiders silent for the last nine innings of the game following a two-run first inning.
Hoping to avenge their WPIAL title game loss to the Tigers last week, Seneca Valley raced to a 2-0 lead in the first inning behind an RBI triple by Sam Fragale and an RBI groundout by Carson Kessler. Starting pitcher Mitch Machi, who’s been terrific this season with a 7-0 record, didn’t have his best stuff on this day as NA turned to Meeker in relief in the second inning with two on and one out. Catcher Justin Dattilo caught one runner napping off of second base and Meeker punched out Gianpaul Gonzalez to end the Raiders threat in the second.

With Meeker holding down the Raiders, the Tigers began to trim the deficit in the fourth inning when Bergstrom led off with a single and stole second base with one out. Waugaman clubbed a triple to score Bergstrom and the Raiders lead was cut to 2-1. To his credit, Seneca Valley pitcher Connor Coward left Waugaman stranded at third base by retiring the next two batters without damage and was terrific on the bump. Coward tossed eight innings and struck out 13 batters while walking none.

However, the Tigers did get to Coward again in the sixth inning when Bergstrom once again led off with a single and was sacrificed to second base on a bunt by Meeker. Waugaman followed with an RBI single and the game was tied 2-2. The contest remained deadlocked until the top of the 10th. Bergstrom reached base on a walk by Raiders reliever Jason Martin. Following a Meeker fly-out for the inning’s second out, Waugaman drove a double to right-center field that scored Bergstrom to give the Tigers the lead, 3-2. On the Wauagaman double, Bergstrom scored from first base and managed to avoid a tag from SV catcher Brad Gresock on a vicious collision and play at the plate. With the go-ahead run already in, North Allegheny added to their lead with an RBI single by Jimmy Divosvic to bring the score to 4-2, Tigers. In the bottom of the 10th, Meeker pitched a 1-2-3 inning to vault the Tigers to the PIAA Semifinals.

North Allegheny improves to 22-4 on the season while the Raiders’ campaign ends with a 19-5 mark. The Tigers will face Lower Dauphin in the state semifinals on Monday at 4:00 pm from Somerset High School.