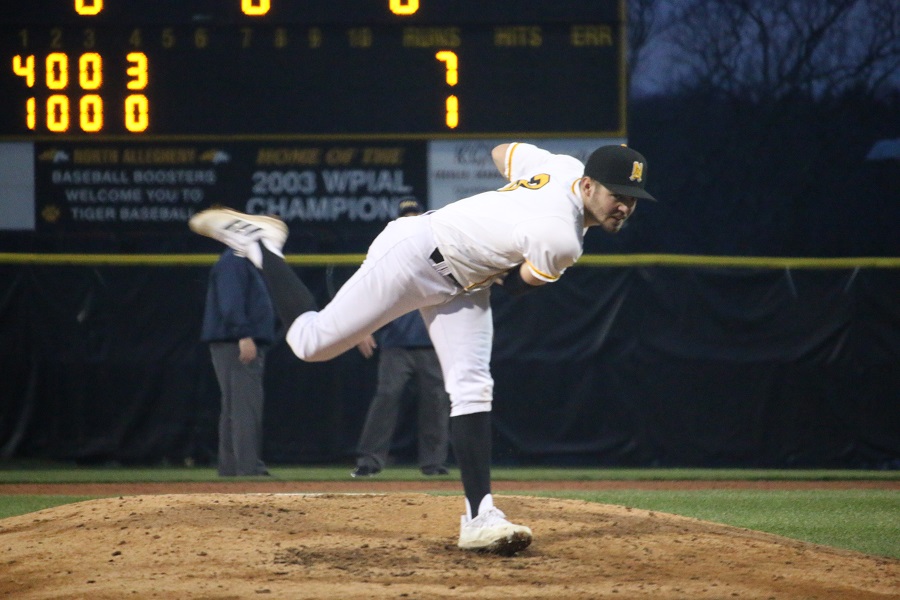 A six-run eruption in the fifth and sixth innings, respectively, helped North Allegheny erase an early six-run deficit and vanquish the Central Catholic Vikings on Friday night, 13-7, in Section 1-6A action. Senior righthander Jack Baumgartel provided 5.2 innings of masterful relief and the NA lineup took advantage of 11 walks and five errors by the Vikings for the comeback win.

In the first inning the roles were reversed between the two teams as four walks by NA pitchers and two errors helped jump start Central Catholic to an early 4-0 lead. The Tigers answered back briefly in the bottom of the first inning on an RBi single by Aaron Posey to trim the deficit to 4-1, but a three-run homer by Brendan Koroly in the top of the fourth gave the visiting Vikings a 7-1 advantage.

Undaunted by the deficit, North Allegheny rallied with a six-run bottom of the fifth to tie the game. Up to that point, Central Catholic starter Cade O’Leary fanned five batters and yielded only one run on three hits in the first four innings. However, O’Leary ran out of steam in the fifth and allowed an RBI single by Aaron Galaska, trimming the Vikings lead to 7-2.

O’Leary left the game with the bases loaded and turned things over to reliever James Hensel to attempt to douse the rally. Instead, Hansel poured gas on the NA fire by walking the first two batters he faced, including an RBI bases loaded walk by Spencer Barnett, bringing the score to 7-3. Former Viking, junior Ian Zahorchak, fanned the flames with a crucial two-run single to swing the momentum and cut the deficit to 7-5. Two batters later, Harron Lee tied the game with a two-run single of his own and the contest was deadlocked at 7-7.

With the score still tied in the bottom of the sixth, another huge inning by the Tigers decided the game. Two walks by reliever Logan Creamer and a Vikings error loaded the bases again for Zahorchak. The transfer from Central Catholic drove in the what proved to be the game-winning run against his former team with a bases loaded walk for an 8-7 lead. The inning continued to unravel for the Vikings as Lee drove in his third run of the night on a catcher’s interference with the bases loaded for a 9-7 lead. Senior Cole Young followed with a two-run double to increase the Tigers advantage to 11-7. Later in the inning, Lee scored on a passed ball and Young trotted home on a wild pitch to bring the score to its eventual final, 13-7.

Young finished with a 2-for-3 night with three runs, two RBI and two walks. Lee and Zahorchak each drove in three runs. Sparking the NA offense in just his second start of the season, Zahorchak’s two-run single in the fifth and go-ahead RBI in the sixth earned him Wright Automotive Player of the Game honors.

Another player who was key to the comeback was Baumgartel, who earned his first varsity victory. Entering the game in the first inning in relief, Baumgartel settled the game down with 5.2 innings of work and made only one mistake pitch, the home run to Koroly. Otherwise, the Penn State Behrend commit silenced the Vikings and struck out a pair of batters in a terrific outing. Reliever Andrew Hart pitched a scoreless seventh to close out the victory.

For Central Catholic, Creamer took the loss with five runs allowed (two earned) in one inning on the bump.

The outcome pulls North Allegheny back into a tie for first place in the section standings with Butler and Pine-Richland, all with a 4-2 mark in Section 1-6A. The Tigers sit at 6-3 overall, while Central Catholic falls to 4-6 overall and 3-3 in the section. The Tigers will visit Cumberland Valley for a non-section game on Saturday at 3:00 p.m.