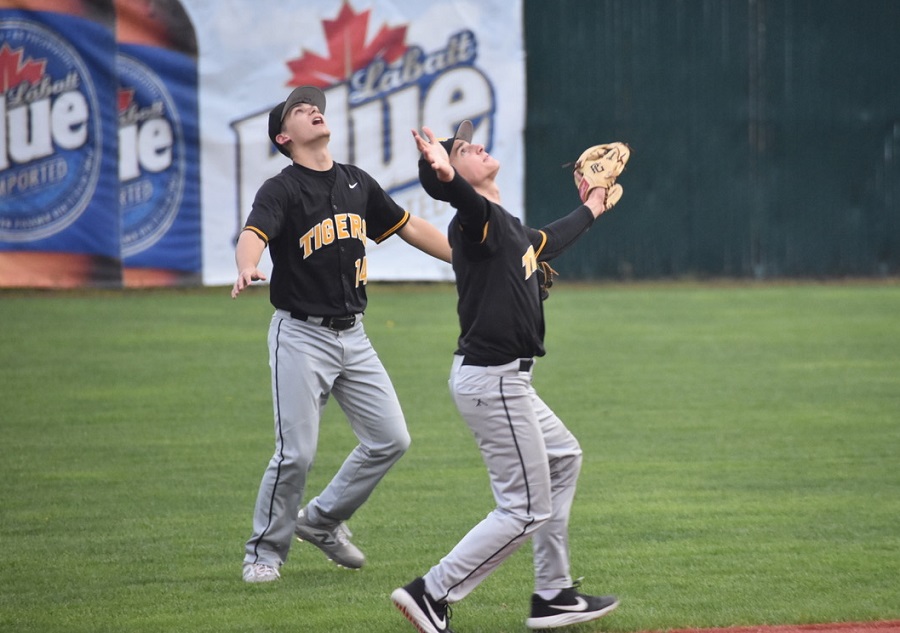 With a fourth-straight win in mercy-rule fashion, the North Allegheny baseball team earned a season sweep of the Butler Golden Tornado on Monday night with a 12-0 victory in six innings in Section 1-6A action. The road win also secured a playoff berth for the Tigers for an eighth consecutive season.

North Allegheny wasted little time in scoring the game’s first run as freshman Cole Young’s sacrifice fly scored J.T. Montross in the top of the first for a 1-0 lead.

Butler starter Simon Brown allowed plenty of baserunners in his four innings on the mound, but the Tigers didn’t fully capitalize until the top of the fourth inning. With two outs and a runner at second, senior Joey Colella drew a walk to put two men aboard and turn the lineup back to the top of the order. C.J. Weller cashed in on the opportunity with an RBI single to improve the NA lead to 2-0. Logan Andreyko followed with a two-run triple and Jared Orwell added an RBI double to balloon the Tigers lead to 5-0.

From there, the game turned into a rout as the Tigers tacked on three runs in the fifth inning courtesy of an RBI double from Shane Murphy, an RBI groundout by Trevor Freyvogel and a sacrifice fly by Colella for an 8-0 lead.

North Allegheny brought four more runs across in the sixth inning with another RBI groundout by Freyvogel, a two-run double by Colella and a bases load walk from Young, which brought the game to its eventual final, 12-0.

Colella went 2 for 2 with a walk, double, triple, sac fly and three RBI to earn Wright Automotive Player of the Game honors.

The North Allegheny pitching staff was once again marvelous as senior starter Anthony Hattrup worked five shutout innings of three-hit baseball. The Dayton University commit struck out seven and walked only one to earn his third win of the season. Reliever Ben Tharpe tossed one scoreless inning in the bottom of the sixth to close out a 12-0 win.

North Allegheny improves to 11-5 overall and 5-2 in Section 1-6A. With a prior sweep of Central Catholic and a win over Allderdice, the NA triumph over Butler secures a playoff spot in the upcoming WPIAL playoffs. Butler slips to 4-9 overall and 2-4 in section play, sitting in fourth place in the section.

The Tigers will play host to Seneca Valley on Wednesday night at 7:00 p.m. Weather permitting, the game will be broadcast live via the internet on the North Allegheny Sports Network.