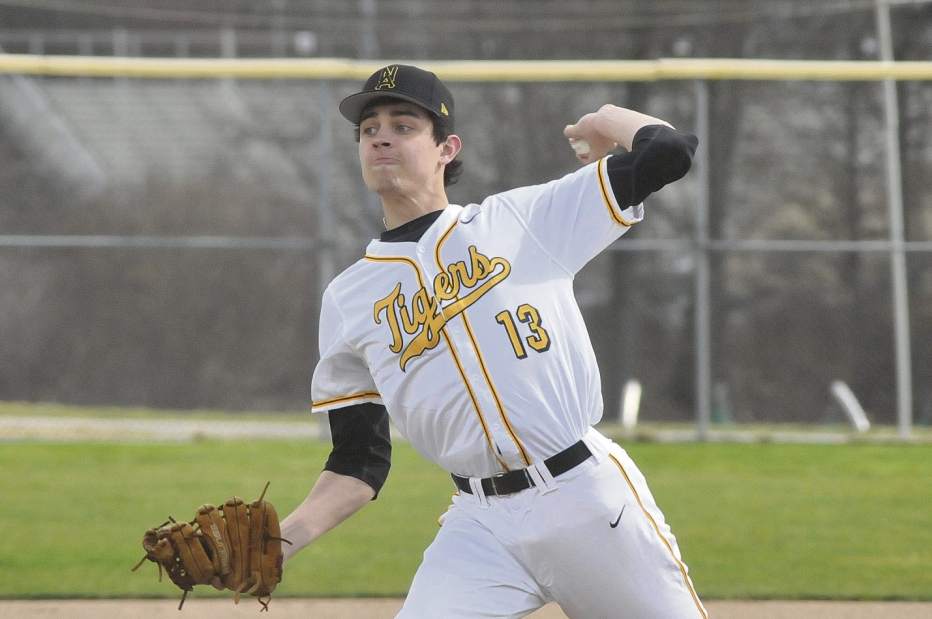 The North Allegheny baseball team wrapped up its section schedule on Tuesday night with a 4-2 home win over the rival North Hills Indians. Senior Jake Fischbaugh paced the lineup by driving in all four NA runs and capped the win on the pitcher’s mound by collecting the final out of the game for his first save of the season. For his efforts, Fischbaugh was named the Wright Automotive Player of the Game by the North Allegheny Sports Network.

The Tigers were facing pesky right-hander Mike Serpa who was 4-0 in four career starts against NA entering the game. However, North Allegheny finally solved Serpa and built a 2-0 lead in the second inning. With one out in the inning, Alex Mesaros and Dillon Layman singled. Both runners were bunted over by Keegan Phillips and Fischbaugh delivered with a two-out, two-run single to give the Tigers a 2-0 lead.

North Allegheny struck for two more runs in a fourth inning that was eerily similar to the second inning. Mesaros and Layman singled with one out. Following a strikeout of Phillips, Fischbaugh clubbed a two-run double to bring the score to 4-0, Tigers.

The Indians chipped into the NA lead with two runs in the sixth inning, but pitcher Jon Dignazio left the bases loaded by inducing an inning-ending groundout from Steven Miller to keep the Tigers in front, 4-2. Dignazio worked 6.1 innings and struck out six batters to earn the win.

North Allegheny’s victory over North Hills thwarted the Indians’ hopes of winning a share of the Section 1-AAAA title and eliminated Butler from post-season contention. The Tigers improved to 11-7 overall and 6-4 in section play, while the Indians fall to 11-5 overall and 6-4 in the section. North Allegheny will visit Shaler on Thursday at 7:00 p.m.