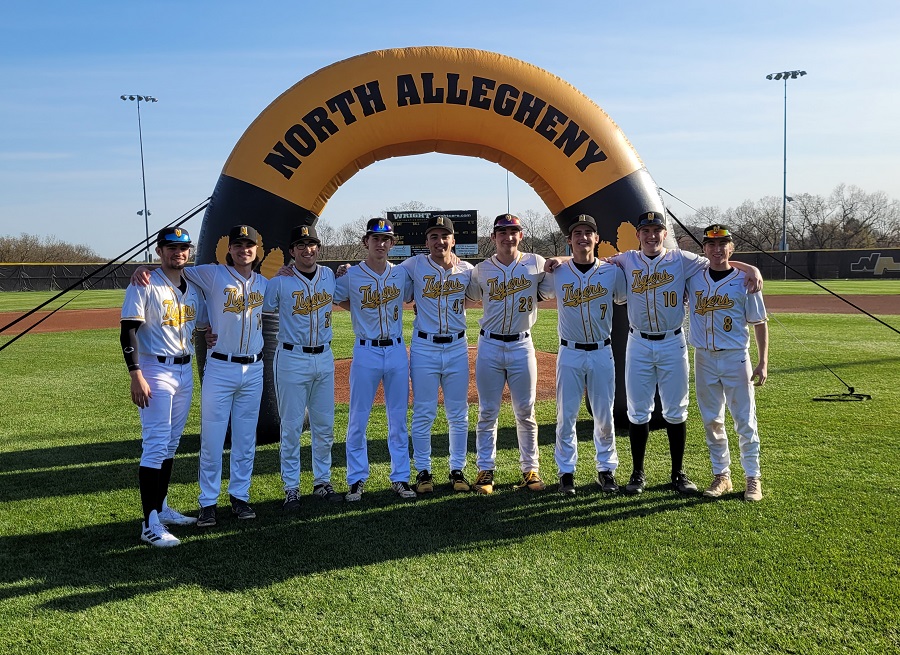 The North Allegheny baseball team rolled to a 7-1 non-section victory over the Hampton Talbots on Senior Night. After back-to-back shutouts of Butler earlier in the week, NA pitchers extended their consecutive inning scoreless streak to 19 in a row before the Talbots scored an unearned run in the seventh inning.

Making his first pitching appearance of the season, senior Aaron Galaska was the opener and worked a scoreless first inning before fellow senior Jack Baumgartel entered the game and blanked the Talbots for the next four innings. Baumgartel allowed only one hit with one walk and four strikeouts for his second win of the season. For his sterling pitching performance, Baumgartel was named the Wright Automotive Player of the Game.

Along with Galaska and Baumgartel, senior Caden Suba pitched the final two innings and surrendered only one unearned run with no walks and two strikeouts.

With Hampton held at bay, the North Allegheny lineup took command of the game early with a four-run first inning. Senior Andrew Hart drove in a run with RBI groundout and junior Harron Lee scored on a wild pitch later in the inning for a 2-0 lead. The Tigers tacked on two more runs in the frame thanks to an RBI single from junior Ian Zahorchak and an RBI triple courtesy of junior Spencer Barnett.

The score remained 4-0 until Barnett batted with the bases loaded in the bottom of the fifth and delivered a three-run triple to extend the NA lead to 7-0. Hampton’s unearned run in the seventh brought the final score to 7-1.

Barnett was the offensive catalyst on this night with a 2-for-3 evening with two triples and four RBI. Senior Cole Young had another two-hit day with a single, double, a stolen base and a run scored.

Hampton starter Charlie Schuit, who was making just his third appearance of the season, ate up five innings in the non-section contest and permitted seven runs (four earned) with four walks and two strikeouts.