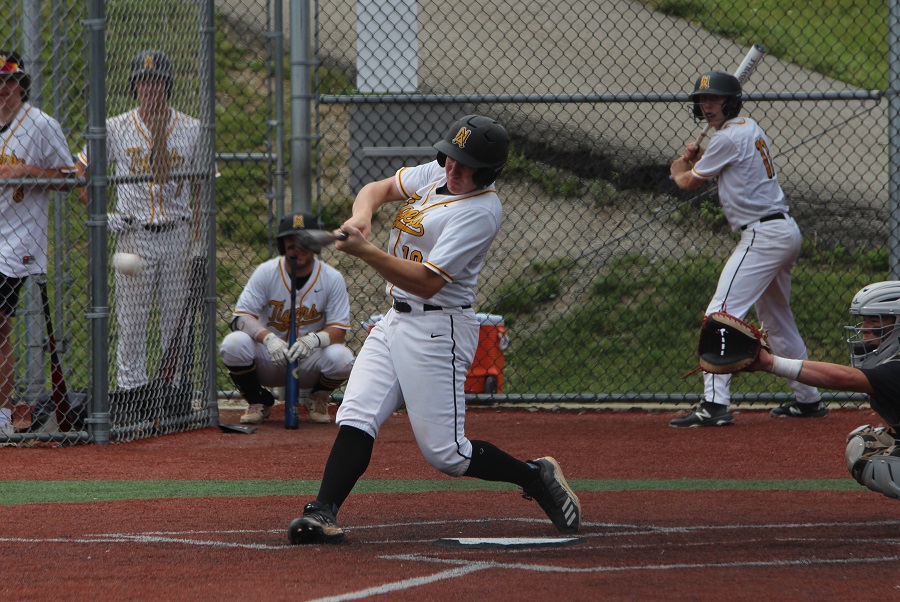 Spurred on by a seven-run fifth inning, the North Allegheny Tigers rolled to a 13-4 triumph over the Warwick Warriors in the opening round of the PIAA Class 6A playoffs. Once again flexing their offensive muscle, every player in the NA batting order either scored a run or drove in a run. Joe Manesiotis, Aaron Posey and Cole Young each went 3-for-4 and Danny Gallon collected three RBI to pace a 16-hit attack.

Appearing in the PIAA playoffs for a fourth consecutive season, North Allegheny was facing a Warwick team that was making its fourth state playoff appearance in program history. In the first-ever meeting between the two teams, North Allegheny struck first in the bottom of the first inning when Young ripped a two-out triple and Gallon followed with an RBI single for a 1-0 lead. In the second inning, the Tigers stretched the lead to 2-0 when Posey clubbed an opposite field home run over the right field fence. It was Posey’s second home run of the season.

After two come-from-behind wins in the District 3 playoffs, Warwick once again rallied back, and in the top of the third inning, tied the game at 2-2 thanks to a solo home run by Reagan Kline and a two-out RBI single from Nick Slogik.

In the bottom of the third, North Allegheny quickly regained the lead on a two-out, two-run double by Aaron Galaska for a 4-2 advantage. Not done yet, Erik Sundgren added an RBI double, and later in the inning, scored on a Warwick throwing error for a 6-2 lead.

Warwick seemed prime for a big inning in the top of the fifth, loading the bases on back-to-back NA errors and a walk. With nobody out, North Allegheny turned to reliever Joe Lang out of the bullpen and the right-hander delivered. While Warwick did manage to score two runs on a pair of sacrifice fly outs to trim the score to 6-4, Lang and the Tigers escaped with no further damage and maintained a two-run lead. The key defensive play during the inning, and for the game, came on a deep fly ball to left-center field by Slogik with the bases loaded. North Allegheny centerfielder Logan Andreyko raced down the fly ball at the fence, resulting in only a sac fly and limiting the Warwick inning.

After surviving the top of the fifth with the lead, North Allegheny busted the game wide open in the bottom of the inning with a seven-run frame. The inning was highlighted by a two-run single by Gallon and included RBI singles from Posey, Young and Manesiotis. Spencer Barnett added an RBI double and Andreyko contributed a sac fly RBI in the big inning as well.

North Allegheny’s prolific offense was bolstered by the bottom of the batting order as Posey, Galaska and Sundgren went a combined 9-for-13 with two walks, five RBI and six runs scored. Sundgren was tabbed the Wright Automotive Player of the Game for reaching bases four times, going 2-for-2 with two walks, two runs, a double, a stolen base and an RBI.

With plenty of run support, starting pitcher Brady Palmer worked four innings to earn the victory and improved to 6-0 on the season. The right-hander struck out four batters and allowed four runs (two earned) on five hits. Lang tossed two scoreless innings of relief and Barnett pitched a 1-2-3 seventh inning to seal the 13-4 victory.

North Allegheny improves to 21-3 overall and advances to the PIAA Class 6A quarterfinals to face Central High School on Thursday at a site and time to be determined. The game will be broadcast live by the North Allegheny Sports Network. Warwick’s season comes to a close with a 16-8 record.