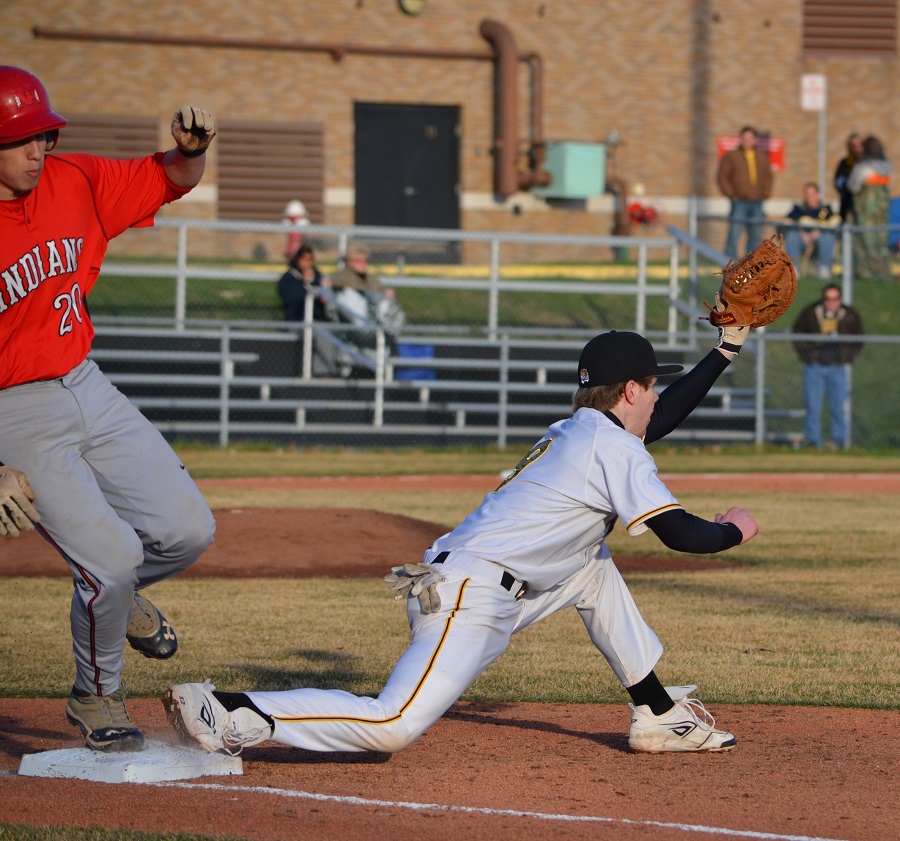 Hits were hard to come by on Wednesday night, but North Allegheny made the few they had count as the Tigers blanked the North Hills Indians, 6-0, in a Section 1-AAAA contest at NASH. The game was originally scheduled for North Hills’ Herb Field, but with the playing surface still damp from rains earlier in the week the section tilt was moved to NASH field instead.

With only four singles on the night, the Tigers made good use of seven walks and one Indians error to score their runs. In the first inning, North Hills’ starter Chad Meyer could not find his groove.  Entering the game having allowed only one hit and three walks in two previous starts, Meyer set the table for the Tigers with five walks in the first inning.  With the bases loaded and one out in the bottom of the frame, Mitch Machi ripped a single to deep left to score Luke Zahren and Josh Plichta for a 2-0 NA lead. Meyer issued Blake Young a free pass to reload the bases for Jason Monper who cued a single through the right side of the infield to drive in Matt Muslin and the score was 3-0, Tigers.  An out later, Meyer provided Garrett Hagen and Zahren back-to-back walks with the bases loaded to increase the NA advantage to 5-0.

An inning too late, Meyer settled into the game and retired 10 consecutive NA batters until Muslin led off the bottom of the sixth with a walk.  A ground out by Dan Trettell advanced Muslin to second and a wild pitch moved Muslin to third.  Machi followed with an infield single to third that allowed Muslin to trot home and the Tigers held a 6-0 lead.

At the plate, Machi continued his torrid hitting by going 2 for 3 with three RBI’s. On the mound, the University of Buffalo recruit mowed down the Indians and allowed only two hits in six innings of work. Machi also provided some dazzling defense as he threw out speedster Brandon Wagner in the third inning on a near perfect bunt attempt. In the seventh inning while in centerfield, Machi threw out the Indians Adam Serpa at home plate for the final out of the ballgame and closed out the 6-0 victory. For his efforts, Machi was named the Wright Automotive Player of the Game.

In addition to Machi’s six shutout innings, right-hander Tyler Saundry tossed a scoreless inning of relief in the seventh to finish off the night. For North Hills, Meyer suffered his first loss of the year and unofficially allowed six runs, three earned, with six walks and six strikeouts. Mike Serpa pitched one scoreless inning in relief in the sixth.

With the win, North Allegheny improves to 6-2 overall and 4-1 in Section 1-AAAA.  North Hills falls to 5-4 overall and 2-2 in section play. The Tigers return to action on Thursday afternoon with a visit to Pine-Richland.  First pitch is scheduled for 4:00 pm.